Azerbaijan was June and we were on a trip, a journey that is going to see cities, villages and beautiful nature around the lake had. Tabriz had the blessings and the Valley of Azar has traveled Pirchupan we had over the WoW milk and tea Zahhak Castle and Castle had touched her and I saw BONAB…Late spring evening was more like April sky, the earth and watered the. Time was limited and we were going to see a monument in BONAB.

Spring and rain in the afternoon. We had wandered the streets of BONAB. Motahari way to the mosque are decorated with wooden Mehrabad visit. Quiet and calm. At first glance, architecture and design was made to look faded. Our luck was accompanied by Mary and Maral professional look with its architectural monuments in recognition of the important role we had. Mary Heydarkhani PhD student in architecture, with simple words and structures formed BONAB is described on the head:

One of the historical features of this small town is its historic mosques. Although the city does not have an area of ​​significant numbers mosque, which generally have fixed architectural pattern. 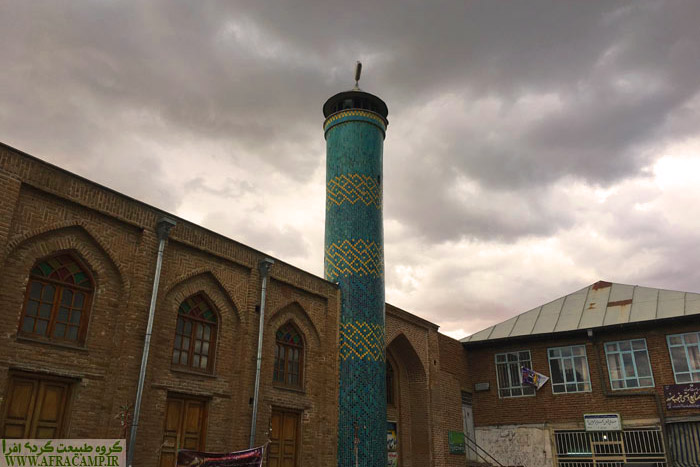 Mosques without floor and courtyard of the main part of the yard. Shbstanhayy created or canceled on the porch beams and wooden pillars that most reminiscent of some monuments like the Ali Qapu etc and Chehel.
Safavid mosques all origins and from that time to remain here. Mehrabad Mosque is the main mosque, mosque or Gzavsh Square, the Blue Mosque and the Mosque Asmaylbyg. According Ktybhash Mehrabad Mosque in 951 AH and likely other mosques built in the same era, and thus prior to the construction of mosques, monuments of wooden BONAB. The number of mosques and buildings set around a bathroom and market … Show the boom town at the time.. So much that the construction boom is likely to contest the mosques together with each trying to surpass the other in the detail and breadth of decorative or.
The outer body of brick mosques, often without specific decorations with windows and Hjrhhayy have formed at the bottom of the outer body. Low chambers with small rooms and shallow ground clearance and may have been in the past, commercial use.
The main features of mosques, wooden columns and decorated wooden ceiling is decorated. The major difference Msjdhast decorated columns and ceilings, small and more local mosques that have Gvchktry size is usually less decorations. Decorating the roof of the mosque Mehrabad 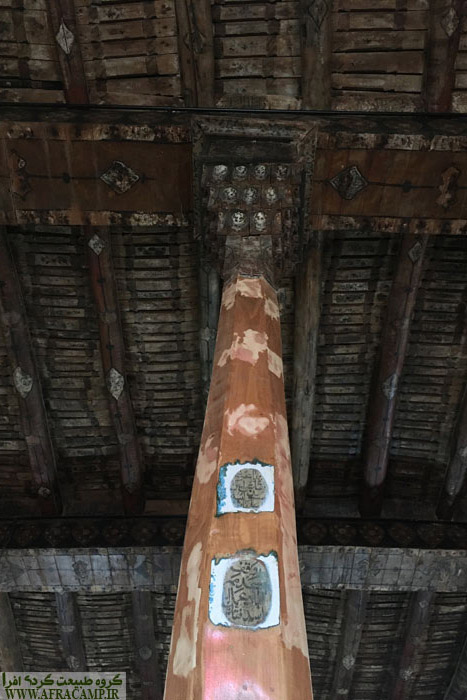 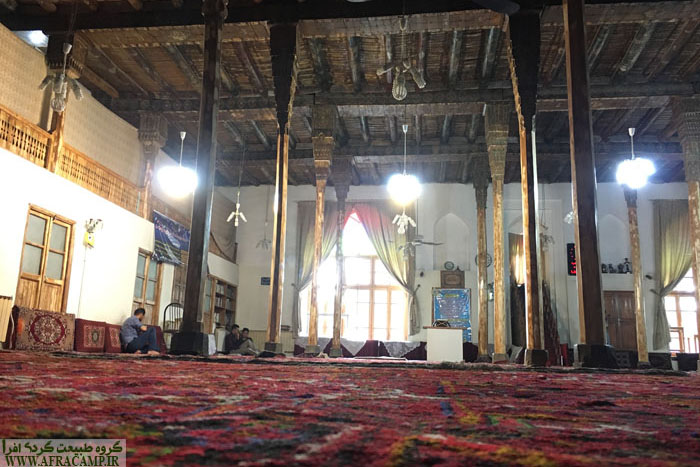 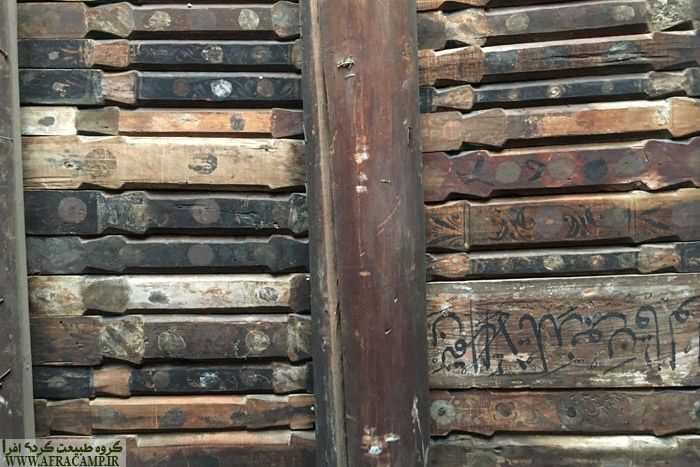 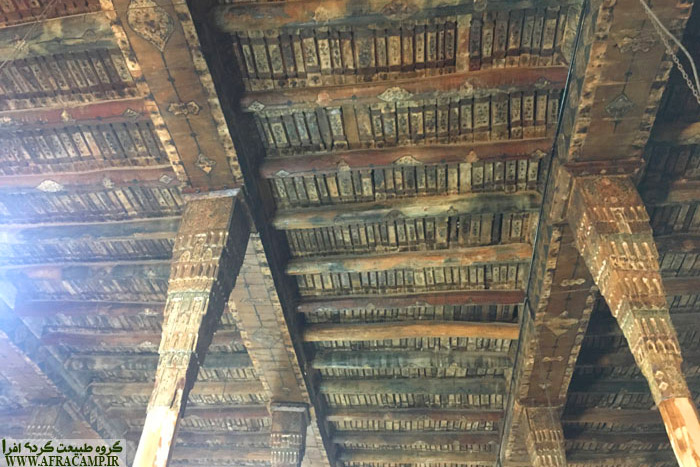 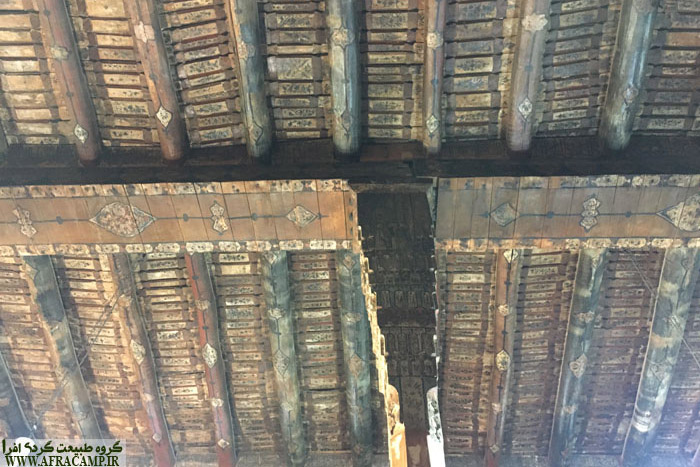 Women in most of the above and overlooking the main nave is Nymtbqە. Another feature of some of the mosques in the entrance porch. Ismail Bey Mosque and the Mosque in the columned porch have your input.

The mosques can be found in the constellation of mosques with wooden beams and columns in this area as they knew in Baku, Maragha and… Is seen. The sum of these mosques and building system of the beams and columns in the building to continue the tradition of this region a very long time, since the Urartu and building system is an example of the hill they saw Hasanlu. You can look at the construction of the mosque's architectural continuity before and after it discovered. 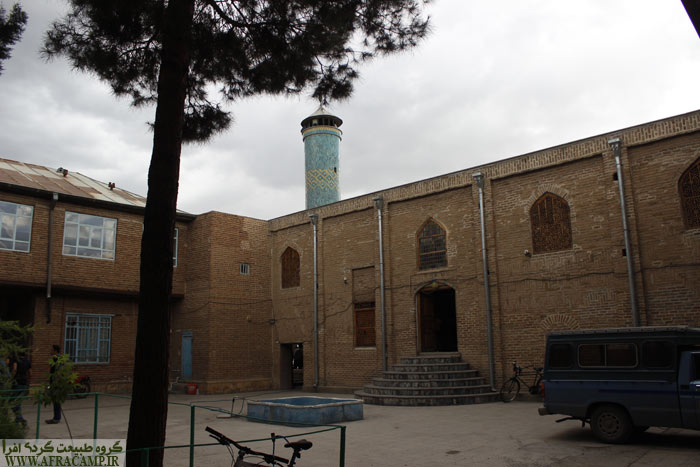 School courtyard adjacent to the mosque 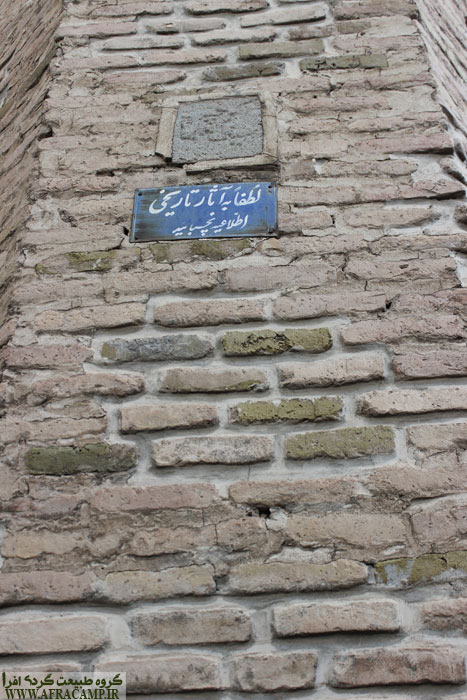 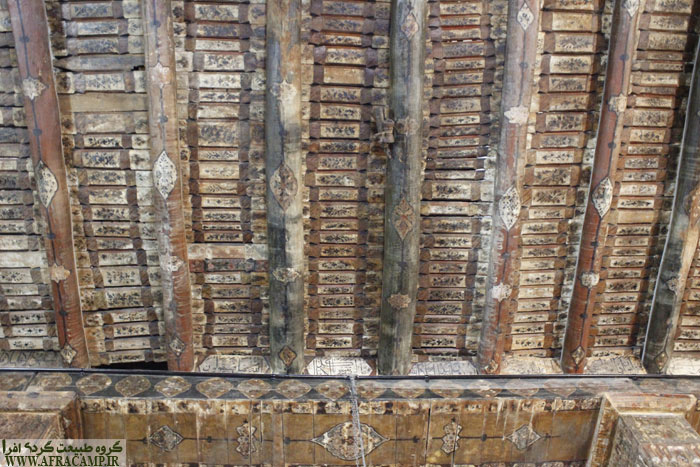 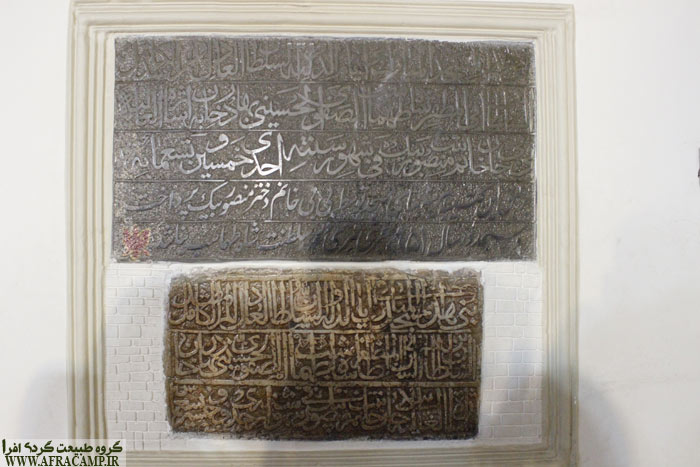 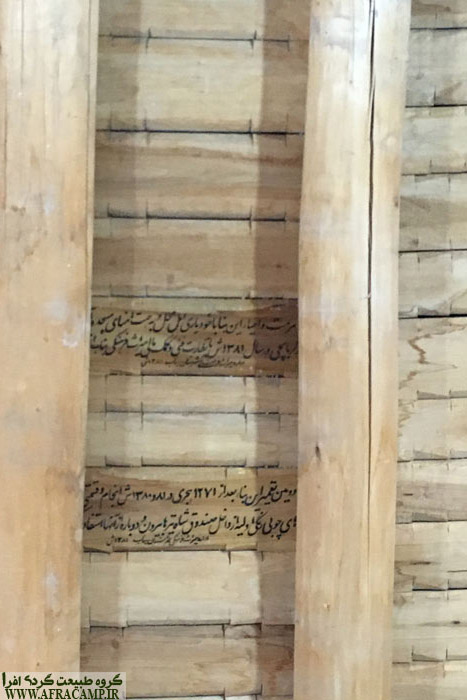 After entering the mosque went to see the Blue Mosque and small local. In closed. Short to keyed got a query. Entered in the small courtyard of the mosque passed and went into the building here a small sample of Mehrabad. Time was too low and should be raised to a beautiful Maragheh and before sunset viewed from several points in the city were. Spring Storm was a breath of fresh air from time to time. Less than 30 km Bonab Maragheh path to quickly pass, and we got into this vibrant city Yagh. After coordinating teacher stay at home to one of the beautiful historic city, where we observatory. Apart from the history of this place, this hill overlooking the city and enjoy the gardens and even the prospect of dried-up lake is doubled at this location. Now that the rainbow after the rain and cool weather it is really more fun than this?! 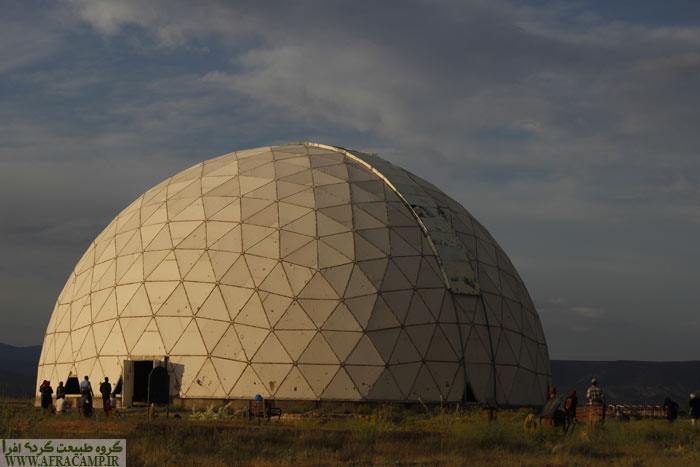 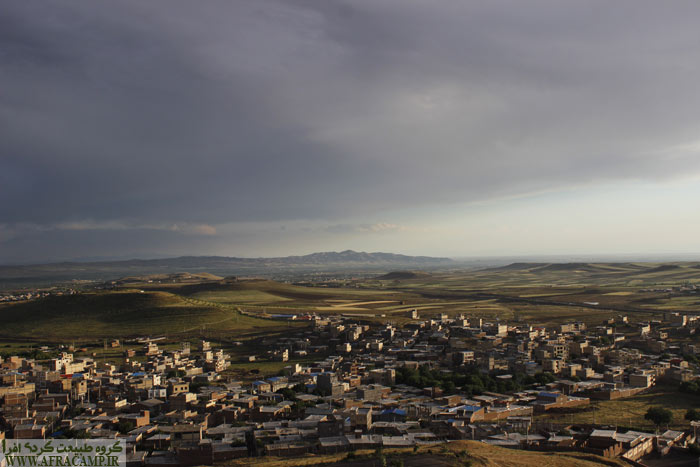 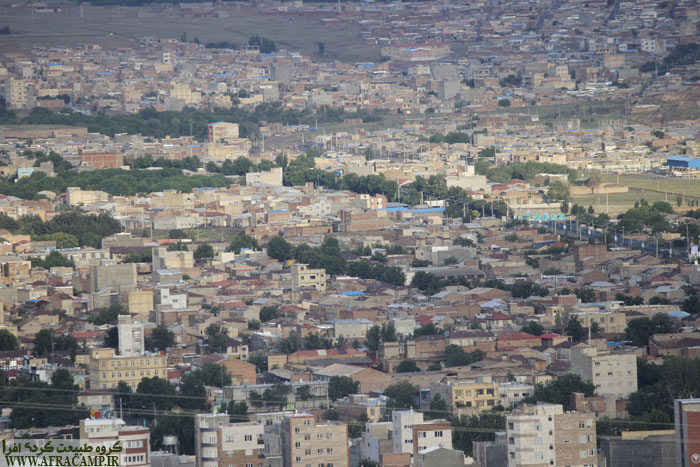 Maragheh Observatory landscape of the area 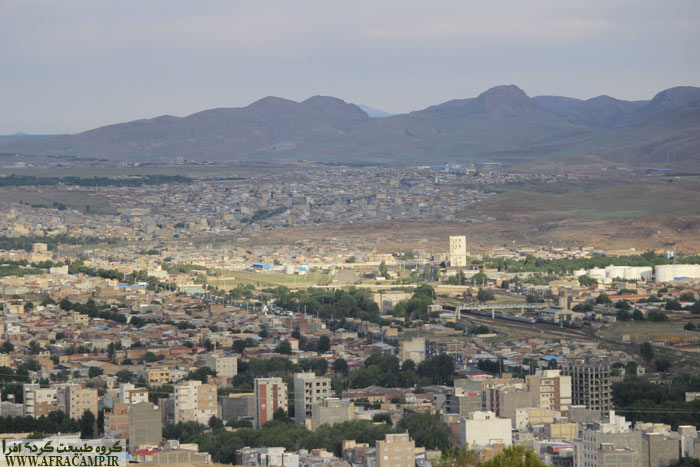 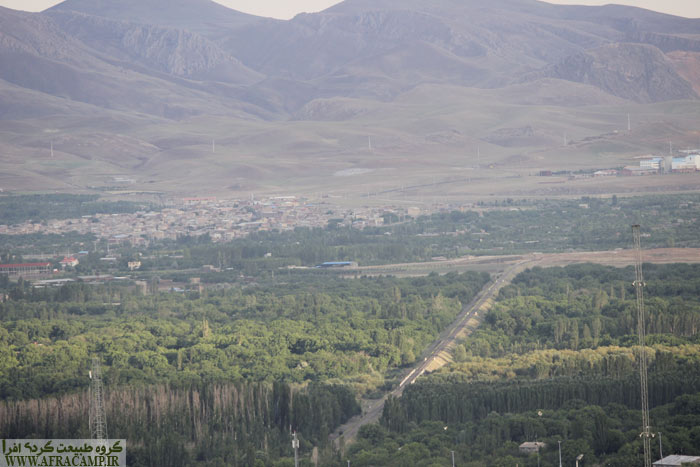 Observatory area with panoramic evening is the best choice

Mary, about Maragheh it completes:

Maragheh because of its many features, the city is spectacular. The first geographical location and its natural properties. Maragheh in South Slopes of Sahand and is located in the foothills of the surrounding hills have been. Urban gardens and lush tree-lined streets with plenty of water and fetching the Sufi Chay River Runs Through It. این موقعیت طبیعی نه فقط باعث شده که شهر آب و هوای مطلوب و معتدل رو به سرد داشته باشد بلکه آب فراوان باعث دور تا دور شهر را باغ‌هایی فرا بگیرند که محصولاتی بی‌نظیر در ایران را تولید می‌کنند و باغ‌های انگور، سیب و گردوی مراغه مشهورند. Vineyards and orchards in South Walnut Lake Dam in the north of the city has drawn Alevis. Mtd gardens around the city and enjoy the river and the slopes of Sahand and climate booming agricultural welcome addition to a good life and comfort are provided for residents. Life in the garden and leisure and recreation. One effect of this is that the city's nightlife. Alawites around the river and the path to the dam is full of gardens, restaurants and other places for fun in night time. Blue disinfection Maragheh, I wish to maintain privacy It was… 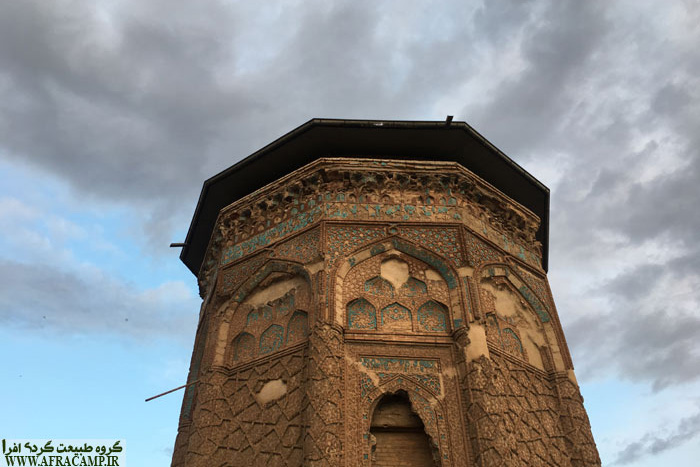 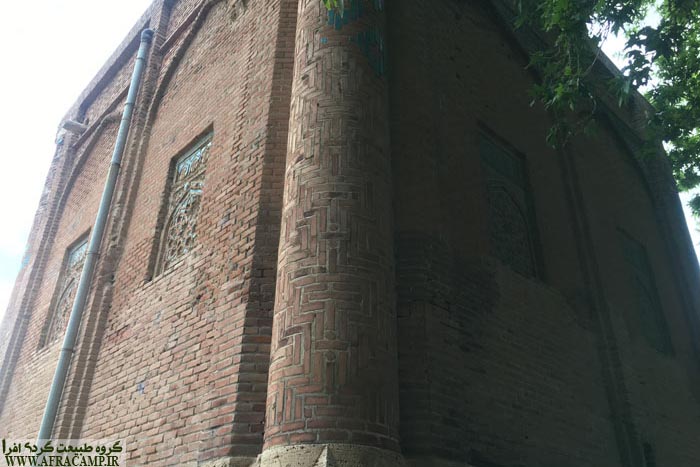 Maragheh and living it has long been considered the. From prehistory to the present. Numerous historical monuments that bear witness. And Badanyash boom in historical periods have been attributed to the period in which the capital. Capital Atabakan and patriarch.

Domes and towers of the city's most famous monuments that often has grave. Red Dome is the oldest of the surviving Seljuk times. Then the blue dome and circular towers and monuments during Sljvqyand and all masterpieces of architectural decorations, a combination of brick and tile in the chronological order in which they are. Ghfaryh dome in the following years in the city made it very beautiful ornament. Most of the main dome collapsed buildings and there.

But the market domes, historic houses and mosques in Maragheh left and walking through the streets and alleys of downtown to see them step by step. Older mosques, Masjid Mzaldyn eighth Azqrn later rebuilt in the Safavid era, and it looks like the outline of the area's mosques with wooden beams and columns. Mosque with wooden tomb chamber based on 36 columns Mzaldyn, influential men of the time, along with its. There are other mosques in the Safavid and Qajar era.

Lows around Maragheh Observatory also the perfect place for famous when he created and now it turns out only part of the foundations. Tusi observatory in the reign of Hulagu and prime minister, along with a library built at that time the world's leading scientific polar Maragheh. After that it will be built on the basis of Samarkand Observatory. Although the observatory building Baqynmandh nothing but great view of the city and surrounding hills also provide.

Maragheh during the Qajar and Pahlavi was also booming. Field construction in the city is continuing symptoms. Side effects also changed the structure of the city and is still in the eye. Alley and famous squares Rezakhani. Following buildings around it and integrate with Iranian and Russian architecture was built around the square and the streets and buildings Bdnhsazyhay a form with a new user. For example, the National Bank with a view to identify and famous architects to Foroughi, a large number of national banks at the time in different cities of Iran designed.

Seeing this beautiful region and lush in the spring miss.